When you are stuck, sometimes all you need is a little motivation and inspiration. Get introduced to your friend in helping to do so – motivational movies. Movies and Shows are a great way to learn from others in the form of stories whether fiction or non-fiction. There’s a lot to be learned from these stories as they show you how exceptional people who have come before you have done it.

This show is highly recommended for every entrepreneur, startup founder and business owner as you will get to learn from the thinking and actions of Marcus Lemonis, a successful businessman who saves failing businesses with his own knowledge and experience. He hunts for real failing businesses, analyzes how they can be saved, and then makes an offer that is impossible to refuse in return for equity.

🤓
Why you should watch this?
This season can teach you so much because you can relate this to your own real-life business issues. Marcus Lemonis judges businesses with three principles “People/Process/Product”. You will get to know the importance of knowing your numbers, staying focused, working hard, getting disciplined, and controlling your pride and ego.

It was no surprise that The Social Network was a blockbuster when it was released in 2010 and remains on top for inspiration and motivation because everyone wanted to see how Mark Zuckerberg transformed his life from a dorm room to launching the most popular social network known as Facebook.

🤓
Why you should watch this?
This movie teaches you how to scale your company, how to choose your co-founders, how friendships can turn and so much more. Whether this movie is 100% true or not, it doesn’t matter, it is a great source of inspiration for all entrepreneurs. Not to mention that they did a great job with the score of the movie.

P:S I started my first digital agency after watching this movie.

“I may not do everything great in my life, but I’m good at this. I manage to touch people’s lives with what I do and I want to share this with you.” – The Chef Movie

This movie is based on the journey of a professional chef who quits his job at a prominent restaurant after refusing to compromise his creative integrity and then starts his own food truck business with the help of his friend and son.

🤓
Why you should watch this?
So many lessons can be learned from the chef movie, Here are some of the movie’s most useful and actionable lessons:

Word of Caution: Don’t watch this movie with an empty stomach.

4- Wolf of the Wall Street

Based on the true story of Jordon Belfort, sprinkled with Martin Scorsese direction and spectacular performance by DiCaprio. This movie is all you need to learn what things money can buy and what it can’t.

🤓
Why you should watch this?
The most important lesson taken from this movie is sales, sales, and sales. Learn the importance of selling yourself and train your people the right way. Learn how to close more sales. Period.

Interesting Fact: Lookout for the “sell me this pen” scene in the movie in the end. Jordan (DiCaprio) hands a pen to one salesman, who begins describing it: “It’s an amazing pen…” Not satisfied, DiCaprio takes the pen from the salesman, hands it to another and repeats the challenge. Again, the salesman describes the pen’s finer features and Mr DiCaprio moves on and the credits roll out.

So what is the correct response?

The real response from Real Jordon Belfort is as follows:

“It’s sort of a trick question. Because when you say to a salesman, ‘Sell me this pen,’ you might find some will say to you, ‘This is a great pen, this pen writes upside down. It defies gravity, this pen is the cheapest pen on earth, this pen will never run out.’ They’ll say all the reasons the pen is good, they’ll start telling you the features, and the better ones will give you the benefits too. But that’s not what the real answer is.

“The real answer is, before I’m even going to sell a pen to anybody, I need to know about the person, I want to know what their needs are, what kind of pens do they use, do they use a pen? How often do they use a pen? Do they like to use a pen formally, to sign things, or use it in their everyday life? The first idea is that when you say ‘Sell me this pen,’ I want to hear [the salesman] ask me a question. ‘So tell me, how long have you been in the market for a pen?’ I want them to turn it around on me and start asking me questions to identify my needs, what I’m looking for. And if you do that, people don’t know what to do. Next thing, he is answering, and now I’m controlling the conversation, finding out exactly what he needs.

“Once I have that, I say, ‘You know, Bill, based on what you’ve just said to me, the pen I have here is the perfect fit. Let me tell you what it’s about…’ Then you can tell them about what you have, because you’re filling a need. Most average or newbie salespeople think that they’re supposed to sell you the pen, when a really seasoned salesperson will actually turn it into a qualifying session to find out what you need. That’s the truth of it. It’s like trying to sell someone a house and you don’t know if they’re in the market for a house, what kind of house they want, how many kids – so how can you sell someone a house? That’s the point.”

“All you need is a laptop or a PC and an Internet connection and you can pretty much do almost anything and create almost any type of company.” – Mark Cuban

One of the most successful and popular series on ABC Network. It can really inspire you to start your own business. The sharks are successful entrepreneurs that will invest their own money in good businesses.

🤓
Why you should watch this?
You will get valuable insights and excellent business tips from these self-made billionaires when they grill businesses in the tank.

"maybe sometimes it’s riskier not to take a risk. Sometimes all you’re guaranteeing is that things will stay the same.” – Yes Man

Carl (Jim Carrey) is stuck in a rut with his job, life and love. Then he goes to a self-help seminar and learns to unleash the power of the simple word “yes”. Living in the affirmative leads him to all sorts of amazing and transforming experiences.

🤓
Why you should watch this?
Sometimes you miss out on great opportunities without even realizing it, is it time that you start saying yes to things that come your way? This inspirational movie will get you thinking.

Word of Caution: Entrepreneurs should also learn to say “NO” otherwise you will lose your focus by getting tied up with so many things and ending up achieving nothing. I’ll write a complete post to explain this. But for now, you have to learn when to say NO and when to say Yes.

This movie shed light to follow your own vision in life and never conform to the viewpoints and expectations of others.

🤓
Why you should watch this?
People will always disregard you for new ideas because change is difficult. This movie teaches us to stand firm on our visions. People will try to change you, mould you into what they what you to be. You can’t let them do it and stick to what you believe in. You never know when a simple idea can become the next big thing.

“And there is no such thing as a no sale call. A sale is made on every call you make. Either you sell the client some stock or he sells you a reason he can’t. Either way a sale is made, the only question is who is gonna close? You or him? Now be relentless, that’s it, I’m done.” – Boiler Room

A 1999 movie highlighting a college dropout hired as a broker in a mysterious firm. Emphasizing the life of brokers and how they convince parties to buy penny stocks that were fictitious.

🤓
Why you should watch this?
Another great movie on sales and investments. You will learn how to convince people and how to follow the philosophy of “always be closing”. It will inspire the salesman in you and you will learn a few sales tips. A great movie for motivating the salesmen in you.

9- How I made my Millions

A CNBC original show where they reveal how everyday people take ordinary ideas and turn them into extraordinary businesses. Businesses that have surpassed the magic number of $1 Million.

🤓
Why you should watch this?
The show is truly motivating because these were ordinary people, just like you and me, with good ideas in their heads. But the idea did not just remain in their head, instead, they took action and persevered, even though many people including their friends and family laughed at their idea. But with their hard work, dedication and commitment to strive they are now living their dream. Only millionaires are featured in this show.

10- The count of Monte Cristo

“But I don’t believe in God – it doesn’t matter, He believes in you” – Count of Monte Cristo

You will really enjoy this movie filled with an enduring story of conflict, betrayal, revenge and romance.

🤓
Why you should watch this?
This movie gives a big lesson that you should always try to learn new skills at any stage of life. When Edmund Dantes(hero) is held captive in the famous Chateau D’If prison located on a barren island, his hope gets beaten every day until a priest in the prison teaches Edmond Economics, Mathematics, Sword fighting and so much more. Which he uses to take revenge.

I bet you will watch these movies and shows again and again. 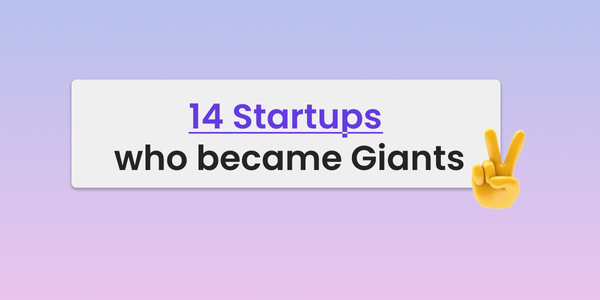 How these 14 Successful Startups got their first customers. Learn how to get the first 1000 users with these growth hacks.

Want to double your and your team's efficiency with this easy office hack.